The City of Des Moines is taking steps to improve emergency planning ahead of major flood events. In response to damaging floods in 2018, city officials formed a Flash Flood Committee to identify and study various flood-related emergency issues. The report was released in January of 2019 and can be viewed on the city’s website.

The flood event that triggered the report came in late June, when torrential rains fell across parts of the Raccoon and Des Moines River valleys upstream from the city. The National Weather Service issued a flash flood warning at 9:30pm on the night of June 30th. Over the next 24 hours Des Moines police dispatch answered nearly 1,700 calls and the fire department responded to over 150 calls for rescue or assistance. This heavy demand for services challenged the city’s public safety officials who in the report recommended more coordination across city departments and the possibility of issuing preemptive evacuation orders.

In addition to public safety, the report identified five areas where city officials and residents can better prepare themselves: communications before and during a flood, debris management and cleanup afterward, storm water infrastructure and capacity, insurance availability, and sustainable development and planning to lessen the damage of future floods.

From a communications standpoint the report recommends the creation of an emergency response plan that would be reviewed annually and spreading awareness through education and outreach during a “severe weather awareness week.” Other recommendations included the creation of an emergency communications website operated jointly by Polk County and the City of Des Moines, and encouraging neighborhood associations, residents, and businesses to form their own flood response plans.

The June floods generated over five million pounds of debris, which created logistical problems for public works and waste management officials. From a debris management standpoint, the report recommends establishing clear rules on curbside pickup of debris in the wake of a flood emergency, using GIS technology to map the most efficient routing for truck drivers picking up debris, designating areas in the city as debris drop-off sites, and distributing “bagster”-style cleanup bags to effected residents.

From an infrastructure standpoint, the report recommends changes to the city’s building permitting that would require new construction projects to meet environmental and stormwater mitigation standards that would be set by the City. Home and business owners are further encouraged to build their own stormwater management systems that include rain collection barrels, water gardens, and more grass cover. Public infrastructure is to be assessed for its capacity and augmented or replaced if needed. Costs to cover these changes would come from a 1% sales tax increase and a plan to set aside a higher percentage of property taxes and devote them to stormwater projects.

From an insurance standpoint the report recommends the city take steps to improve its Community Rating Score (CRS). Determined by FEMA, a city’s CRS is a valuation of how much effort it puts into flood protection and flood planning beyond the minimum standards set forth in the National Flood Insurance Program. Cities that exceed minimum standards are rewarded with lower scores, and consequently lower flood insurance rates. Des Moines currently has a CRS of 7, which translates to a 15% discount on federal flood insurance. The City of Cedar Falls, by comparison, has a CRS of 5 and qualifies for a 25% discount. Achieving a lower CRS score requires extensive, long-term planning of projects such as those outlined in the 2018 Flash Flood Report.

From a sustainability standpoint the report recommends a watershed approach to flood control and emergency planning. Such an approach would require public and private support from beyond the city limits of Des Moines, particularly among upstream communities. Possible routes of cooperation might include upstream communities participating in the FEMA CRS program, which qualifies them for federal funding for floodplain management planning. Of the six Iowa cities participating in the CRS program, the only city in the Des Moines/Racoon River watershed is Des Moines. Four are in the Iowa/Cedar watershed and one is along the Mississippi River. FEMA also allows counties to participate, of which there are three in Iowa that do: Linn, Story, and Pottawattamie; with Story being the only county that shares part of a watershed with the City of Des Moines.

Finding neighboring cities and counties in the watershed would go a long way towards better flood planning and preparedness during emergencies, which is the goal of a community group that contributed to the Flood Report. The sustainability portion of the Flood Report was written in consultation with the Des Moines Citizens Task Force for Sustainability. Established by the Office of the Des Moines City Manager, the Task Force was created as part of the city’s long-term strategic plan. The Task Force’s community contact, Carolyn Ulenhake Walker, would like to see more city resources devoted to long-term planning and flood resilience. When asked how she thought the city officials could move the needle on these issues, Ulenhake Walker recommended more attention be given to watershed planning; “Because we know extreme rain events are occurring more often, the taskforce thinks watershed projects need more attention and more money.” She was also supportive of looking for like-minded stakeholders outside of the city limits. The metro-adjacent cities of Ankeny and Clive are collaborating with Des Moines on watershed planning projects for the Walnut Creek and Four Mile Creek watersheds. Additional support is being provided by officials with Polk County’s Soil and Water Conservation office in Ankeny. Although these projects are still in the developmental stages, Ulenhake Walker is optimistic the watershed approach will be successful; “[We] would like city staff to really research this topic, as well as act upon the [watersheds approach] recommendation.” 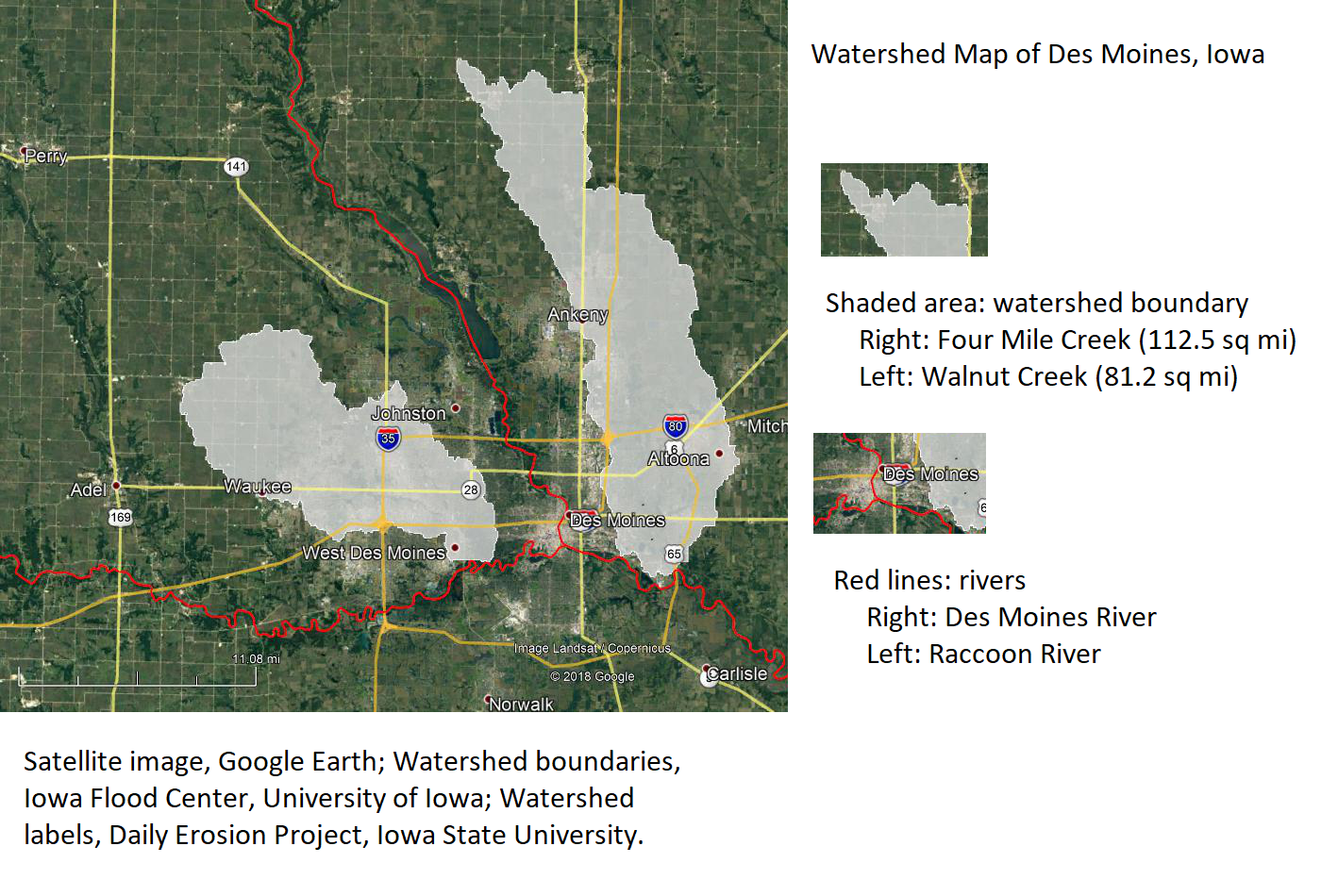 The author of the Flood Committee’s sustainability recommendations echoed the Task Force’s plea. Brian Campbell, Director of Sustainability Education at Simpson College, says that 2018 Flash Flood Report is an opportunity for the City of Des Moines to situate itself in broader conversations about sustainability and watershed planning; “Our hope would be that city leaders work to engage as broadly as possible – upstream and downstream, inside and outside Polk County.” Although a planning process involving multiple stakeholders can be painstakingly slow, Campbell is optimistic that the city can make quick progress by adopting models already in use elsewhere; “I’m not an expert in this area, but my sense is that something like the Iowa Watershed Approach (IWA) would be helpful to convene different stakeholders.” Both Campbell and Ulenhake Walker attended a fall 2018 meeting about the benefits of the IWA and incorporated their findings into the recommendations. The meeting was hosted by Des Moines-based engineering company RDG Design.

While the planning process slowly moves forward, the city has also taken short-term action. Homes in the areas hardest-hit by the June floods are being bought by the city. As of the end of 2018 the city has acquired 78 properties at a total cost of $10.5 million. Most of the properties lie along Four Mile Creek, on the city’s northeast side.

Residents interested in a watershed approach for Des Moines are encouraged to attend any regular meeting of the Citizen’s Taskforce on Sustainability. The group meets monthly, on the first and third Wednesdays, at 4:30pm. The meeting location is Ingersoll Park, at 4906 Ingersoll Ave. For more information contact Carolyn Ulenhake Walker at carolynruw@gmail.com. 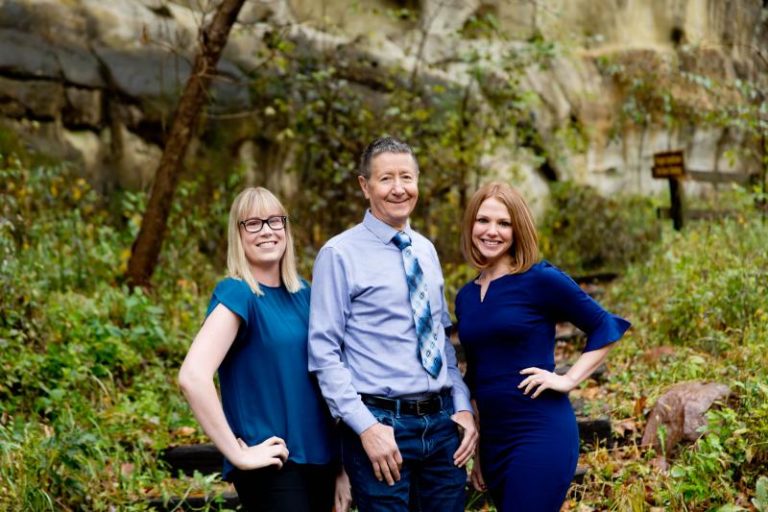 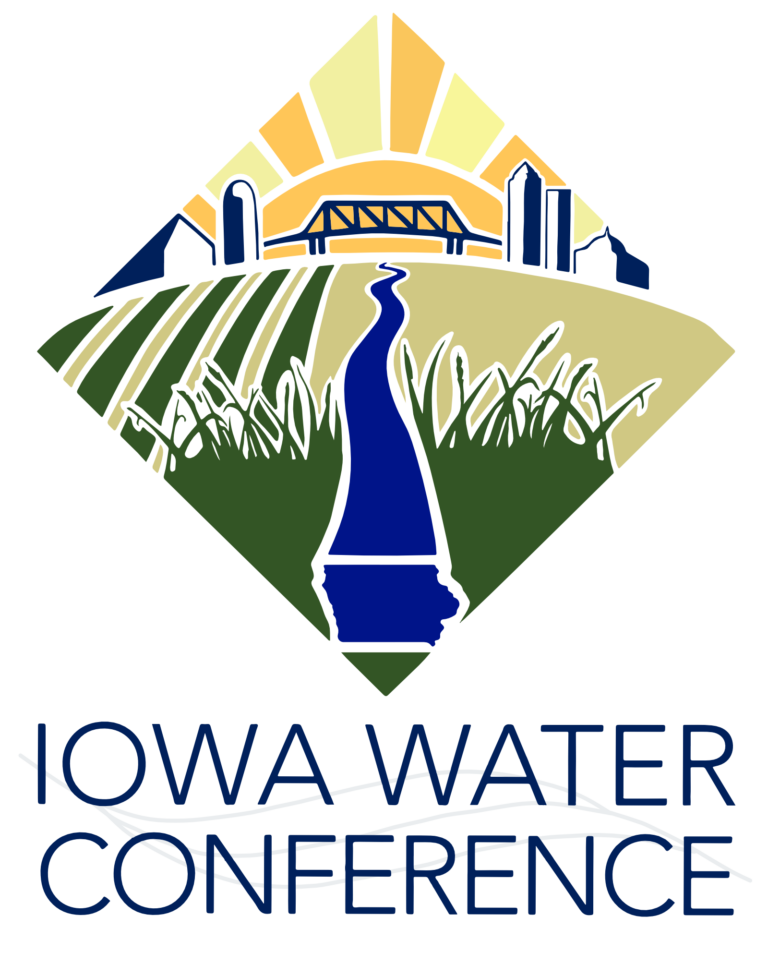