From Getting Into Soil and Water 2018 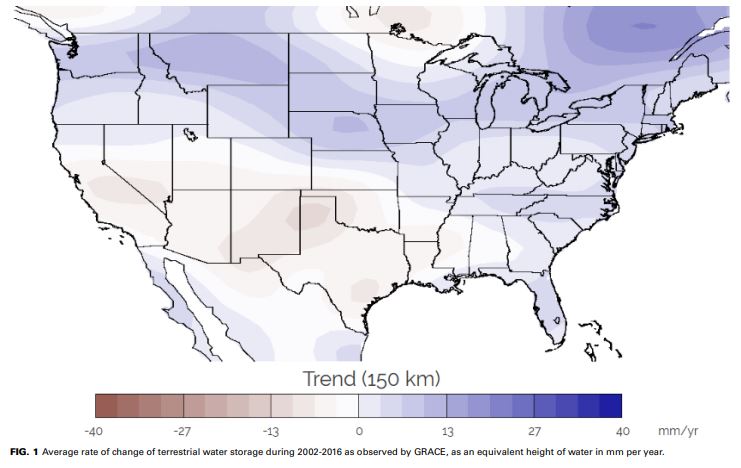 When water from rainfall and snowmelt enters and saturates the soil column, some of that water flows to streams, some evaporates and some is absorbed by plant roots. The rest drains downward to recharge underground aquifers, where it can remain for months, years or even millennia. If you dig deep enough, groundwater can be found almost anywhere, even beneath the Sahara Desert. Groundwater is vital to both people and ecosystems because of the ability of aquifers to store water during wet periods for use during dry periods. It supports domestic, municipal, industrial and especially agricultural usage in places where surface waters are not available, and it sustains streams and rivers, via contributions to baseflow, in between precipitation events

Groundwater may be widespread, but it is not unlimited. In places where groundwater consumption continually exceeds groundwater recharge, aquifers can be depleted. Potential consequences include wells running dry, streamflow being diminished, phreatophytes (deep rooted plants) suffering, groundwater quality worsening, the aquifer compacting and the land above subsiding. Further, climate change may reduce or enhance recharge depending on how it affects rainfall and snowfall intensity and totals. Therefore it is critical that groundwater storage changes be monitored. While certain U.S. states and the USGS maintain networks of groundwater monitoring wells, which enable fair to good assessments of groundwater variability, other states and most of the rest of the world have sparse observations or do not make their data available to the public.

What if there was a way to measure groundwater storage changes from space? In 2002, NASA launched the Gravity Recovery and Climate Experiment (GRACE) satellite pair. Instead of “looking” downward and measuring emitted or reflected electromagnetic radiation (e.g., microwaves, visible light) like most remote sensing satellites do, the twin GRACE satellites used a K-band microwave link to measure the distance between each other (roughly 200 km) with micron-scale accuracy (a red blood cell is about 5 microns in diameter) as they orbited the Earth, one following the other. Heterogeneities in Earth’s gravity field, related to the uneven distribution of mass near Earth’s surface (consider a mountain range), perturb the orbits of satellites in a predictable way. Hence by monitoring the separation and locations of the GRACE satellites every 5 seconds, scientists were able to construct a new global map of Earth’s gravity field each month. From month to month, those maps changed due to the redistribution of mass, in particular, atmospheric and oceanic circulations and changes in the amount of water stored on and in the land surface. The mass circulations were simulated and removed using data-integrating models. What remained were mass changes associated with terrestrial water storage (TWS) – the sum of groundwater, soil water, surface waters, ice and snow. As before, changes in soil water, surface water and snow can be estimated and removed using data-integrating models, enabling scientists to isolate groundwater storage changes from the GRACE measurements.

Not convinced? Consider that GRACE data have been used to quantify the mass losses of the Greenland and Antarctic ice sheets and glaciers in Alaska, to monitor droughts and to “close the water budget” by providing a measurement of TWS change to balance precipitation, evapotranspiration and runoff in large river basins.

GRACE is not perfect – the smallest area it can resolve is about the size of Iowa (145,000 km2), and it cannot tell us the total quantity of water available at a location, only how it changes from month to month – but it has enabled a revolution in groundwater monitoring. GRACE revealed severe groundwater depletion in northern India and detected and quantified groundwater losses in northeastern China, Saudi Arabia, the Middle East and California’s Central Valley, among others.

How has Iowa fared? During 2002-2016, TWS increased across Iowa at an average rate of about 3 mm/yr due to natural variability. Figure 1 shows a map of TWS trends in the continental U.S. and Figure 2 shows the monthly time series of TWS for Iowa. We can infer from the latter that a large amount of groundwater was lost from Iowa during the severe drought of 2012, and that wet weather from 2013 through early 2016 raised water levels to above normal.

The GRACE mission concluded in October 2017. While the end was sad, the satellites survived ten years longer than planned, and NASA’s GRACE Follow On mission is scheduled to launch in March 2018 to extend the incredible data record provided by GRACE.

July 21, 2021
We ask Dan Gilles, Water Resources Engineer from the Iowa Flood Center, the question: What is a hydrologic assessment?
Read More

June 2, 2021
We ask Antonio Arenas, of the University of Iowa, the question: How many flood declarations has Iowa received?
Read More